My god!!! News practically keep coming in as we speak!!!
Yesterday, I reported how Ian F (over in NJ) by accident has found the whereabouts of Peter O'Brian and now I have discovered that there is indeed ANOTHER Rambu film over in Indonesia!! It's insane!!

When they shot the ordinary film (well, ordinary to everyone outside of Indonesia/Malaysia) Parkit Films also produced a different version for the local Indonesian market!! And here I was thinking RAMBU was already very Indonesian!! So what they did was they double filmed all the scenes with Peter O'Brian in them WITH AN INDONESIAN actor playing O'Brian's part!!!
I made the discovery as I wanted to re-read the comments to the film intro that someone posted on YouTube but instead I found what appeared to be the same intro... but wasn't. Well, I guess it is... just with the other actor in it. LOL.

Here's the intro to the original International version of RAMBU, under the title of THE INTRUDER (it's from the Greek vhs):

And here's the intro to the Indonesian version of RAMBU, under the title of PEMBALASAN RAMBU (I assume it's from the Malay VCD):

I must admit I think the Indonesian guy playing the Rambu character looks like a piece of wet cardboard compared to Peter O'Brian! He doesn't resemble Rambo in the least bit!! Wasn't that the whole point of the movie!! ha ha.

However, having said that, I would of course LOOOOOVE to watch the Indo version. Obviously, I did try and find the VCD but none of the online stores that I know of has it. I must have googled for at least a couple of hours but came up with zilch. Well, nothing except this photo from (what I think is) a Malaysian website of someone holding the Malay VCD release in his hand (a guy who is in a baaad need of having his finger nails cut, LOL): 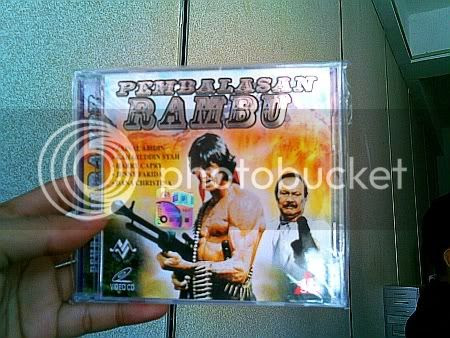