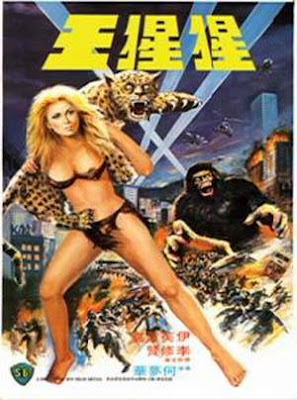 Unfortunately, I just read that Evelyne Kraft died in January in Switzerland! Evelyne Kraft was of course the best jungle bunny to be caught by a Hongkongese King Kong wannabe (in Mighty Peking Man aka Goliathon/Colossus of Congo). When 'Asian Trash Cinema' #1 came out they had a raunchy pic of her on the back of the cover and I just knew I had to track down that film.

I found this piece of sad news here:
http://monsterkidclassichorrorforum....yne-Kraft.html

- where someone translated the obituary from the Swiss magazine 'Blick':

Originally written by Michel Bodmer/translated by Doctor Kiss
In memoriam Evelyne Kraft (1952 - 2009)
It's as if Evelyne "THE MIGHTY PEKING MAN" Kraft had been completely forgotten. When Swiss cinema doyenne Anne-Marie Blanc (FURY OF THE SABERS, 1965) died in early February, practically every newspaper from the Adliswil Advertizer through to the Zofing Herald dedicated copious column-inches to this lamentable 'loss to the Swiss film and theater scene.' By contrast, Evelyne Kraft's death two months ago in a rural part of Zurich canton barely caused a ripple in the press, with only Blick and the Mittellandzeitung reporting her passing under the catchpenny headline 'King Kong's Swiss Bride is Dead.' Of course, they didn't mean King Kong at all, but Utam, the giant ape from the 1977 Hong Kong trash classic THE MIGHTY PEKING MAN. In the movie, Kraft swung her way through a pot plant jungle, where she had been raised by the mega-gorilla following her parents' death. Although Kraft might have risked damaging the film's profits when she revealed that her hirsute guardian 'wasn't an animal at all, but an Asian guy in an ape-suit,' the movie in fact proved a successful long-term seller, apparently served up most recently to cinemagoers in Mumbai. And THE MIGHTY PEKING MAN made such an impression on Quentin Tarantino that he secured the distribution rights to the picture. (...)

The blonde from Zurich's short-but-memorable screen career began in 1972, alongside Anita Ekberg and Howard Vernon in Ferdinando Merighi's workmanlike giallo THE FRENCH SEX MURDERS. A role as a vamp followed in 1973's THE MANUFACTURERS, co-scripted by Swiss cinema's arguably greatest talent in the comedy field, Clemens Klopfenstein (THE BIRD PREACHERS, 2005). Prefiguring David Cronenberg's CRASH (1996) was director Rudolf Zehetgruber's decision to establish a libidinous connection between Kraft and the Volkswagen Beetle 'Dudu' in the movies SUPERBUG, THE WILD ONE (1973) and SUPERBUG, THE CRAZIEST CAR IN THE WORLD (1975). The actress's Hong Kong excursion followed at this point, before she returned to Europe, armed with newfound gorilla experience, to appear in the French-German co-production OOH LA LA... THE LITTLE BLONDES ARE HERE (1977), in which she played Karin alongside the hugely popular Olivia Pascal's dazzling performance as Maria. She also turned up on German television in single episodes of [detective series] Der Kommissar and [comedy sketch-show] Klimbim, before bidding a worthy farewell to her screen career alongside Brad Harris, Theo Lingen, Eddi Arent, Walter Giller, Roberto Blanco, and Herbert Fux in Franz Josef Gottlieb's LADY DRACULA, and alongside Helmut Berger and Udo Kier in Duccio Tessari's THE FIFTH COMMANDMENT (both 1978).

Thereafter, according to Blick magazine, the former screen-blonde dedicated herself to a) animal welfare, b) global poverty concerns, and c) her husband's real-estate company. Evelyne Kraft died of heart failure on 13th January 2009, aged 57. May she rest in peace. 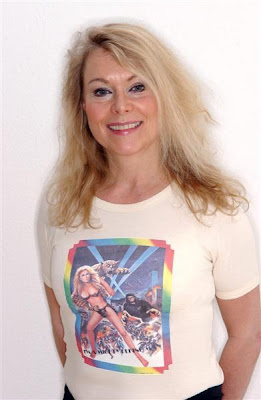