LA NAVE DE LOS MONSTRUOS (aka The Ship Of Monsters, 1960) 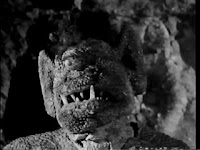 Heeey, it's Friday! (although in the words of Primus: "Funny thing about weekends when you're unemployed. They don't quite mean so much", haha) and I've pulled out a FUN trailer for y'all for the (probably) cool Mexican horror/sci-fi movie LA NAVE DE LOS MONSTRUOS, or as it's known in English The Ship of Monsters. 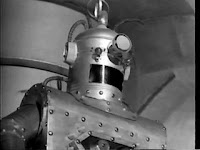 I haven't actually watched the film (but I will soon as the DVD has arrived!!) but people I know swear this is one of the most fun Mexican horror flicks. If you've watched old Mexican horror movies for a while you might recognise some of the monsters in other movies. One of my Saturday Night Fright Flick trailers was SANTO & BLUE DEMON VS. THE MONSTERS which among others featured the Cyclops from this movie. 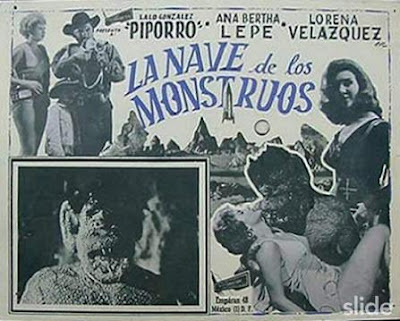 There's more scans on the Cinediondo blog which is also where I discovered the film and nicked the scans.

NB: I know, I know! Strictly speaking this isn't a trailer but there are no trailers on YouTube for NAVE DE LOS MONSTRUOS and I wanted to show something from it. LIVE WITH IT, CABRÓN!!! 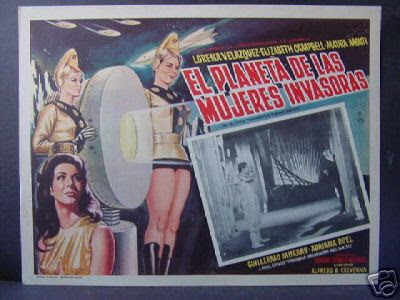 After I finished the above post (this was all meant to be just a three line post!) I wanted to re-read an online interview with Lorena Velazquez who plays one of the films lovely aliens. She was also in EL PLANETA DE LAS MUJERES INVASORAS (aka Planet of Invading Women) which I've written about before on this blog. The interview was posted on a web-page put up by the San Diego Latino Film Festival where the interview was held in 2008.

However, much to my surprise the entire site has been removed! Or maybe it's just not working at the moment but, regardless, it isn't there now and who knows when and if it'll be back up. Luckily, I had already saved a copy of the page on my computer and I'll post the interview here because it would be a pity if it just disappeared for all eternity. Unfortunately, somehow the pictures on the copy I saved didn't make it so you'll have to do without. And yes I'm aware I'm entering into criminal activity here by posting someone else's interview but, as I said, it's far too cool to lose.

If you weren't at the San Diego Latino Film Festival last Friday for the 1966 sci-fi cult classic El Planeta de las Mujeres Invasoras/Planet of Invading Women then you missed seeing its star Lorena Velazquez in person. The statuesque Mexican actress still looked great at 68 and draped in multiple strands of pearls. In her comments after the film, she said that we need "the old Mexican glamour back." Well she certainly provided a dose of that glamour at the festival as she accepted an award from SDLFF founder Ethan Van Thillo. Although she will not appear at the festival again, you do have the chance to catch her in the 1960 film La Nave de Los Monstruos/Ship of Monsters Friday March 14 at 10pm. (Listen to her description of the film.) This film surpasses El Planeta de las Mujeres Invasoras to deliver a delightful sci-fi romp complete with space babes in bathing suits, robots, assorted monsters and a singing Mexican cowboy. I had a chance to interview her before the screening.

At last Friday's screening, Velazquez said that she was discovered by Rene Cardona (the father of "Mexploitation" director Rene Cardona Jr.) in a school play. Cardona was a friend of her father, Mexican character actor Victor Velazquez. She also described her films as "really naive, really innocent but it was lots of fun to do them." She even suggested that although Hollywood started doing these kinds of films, it was Mexico that invented all of this!

Local Tijuana filmmaker Aaron Soto asked if she had ever heard about a comment from Spanish director Pedro Almodovar in which he said that his dream was to make a biography of her life because she is one of the most beautiful actresses ever. Her answer was that she heard him say that about herself and her sister, Teresa (another legendary Mexican actress), and she also heard that characters in his films were inspired by the two of them. She ended by saying she was "flattered and he's a gentleman."

I had a chance to sit down with Velazquez last Friday before she presented her film. Here's what she had to say.

BETH ACCOMANDO: Tell me about the films that are showing at the festival?
LORENA VELAZQUEZ: In El Planeta de las Mujeres Invasoras, they think we came from the moon or Saturn with our space ship. We came and I'm the queen of the planet but I have a sister and she's very good. She's my twin. I'm the queen but I'm a bad girl. The story is very interesting and very new in the year of 1962-63, it was very new because no one was touching those kind of story. The other picture, La Nave de Los Monstruos/Ship of Monsters, was with the beautiful comedian Lalo Gonzales "Piporro" and he's from the north of Mexico City, and he was a big liar in the film. He take drinks and he came to the bar and he say "Listen what I did, I kill a big bear and a lion." And everybody say, "Oh, you're a liar. We're not going to believe you." Once he find us and the space ship and he came immediately to the bar and he says, "Listen this is the true, I saw the women from another planet and I saw the space ship and you have to believe me this is the truth I saw them." And everybody say "Oow, comcom'on you're a big liar." It's beautiful. Everything is like the comedy this is not the tragedy. This is you have to be laughing no? All the time, at least we did. This is almost 40 years, 50 years now so you have to see the picture, and in Mexico we don't have all the money that the Americans have so this is a little bit cheaper the picture.

BA: Did you have fun making those pictures?
LV: Yeah sure. I been making pictures since I was 14. My first picture I made it under the water, yeah really. Because we swim very well in the picture. We made a beautiful picture under the water or almost all under he water. I made my first picture in Mexico when I was 14 years old. I'm not going to tell how old I am. [she laughs] But can you imagine I'm 68. [IMDb has her age as 70 but who am I to argue.] And I made 280 films, really. I was retired because I was married with an American boy. He was a GM dealer in Mexico. [She now acts in Mexico's highly popular Telenovelas.]

BA: Do you have any memories about making La Nave de Los Monstruos/Ship of Monsters?
LV: The space ship comes and we have monsters because we go to another planet, we want to get one different person from each planet. In Saturn the men are monsters. For example I said one of them, "You're so beautiful." And you can see a monster! And in the other planet we have another man, a monster, he doesn't have a head, he has just the big brain, not hair, not nothing. I have to kiss one of them. And this is a real experience let me tell you because they were with... I don't know what they have in their mouths. They look like they are sweating, they have something in the mouth that when I kiss him, oh my god! What am I doing? But I was so young that maybe it's water or something but it looks like Jello. Like jelly or something. No this is a big experience. But let me tell you in Mexico it is a classic film. This is something that's not just for the kids. This is a picture for everybody because everybody can be happy with this. And they can laugh and they will have one hour and a half to be happy.

BA: These sci-fi films didn't have a lot of money to work with did they?
LV: They are making a film from space but they don't have money to do these things. It's a miracle. When you are in Hollywood you see all the technology that they have. We don't have money. We do it... I don't know how. This is fun. We're going to do it and we do it. It's like everything in this world you just need the idea and the know how. But when you are making a picture you think, "Maybe this is going to be a good, good picture." You never think that what you are doing is not very good. You think we are like the Americans. You think this is the best work. You never think this is so cheap and they don't have the technology. But the Mexicans are very smart about making arrangements. A Mexican is the inventor of the color TV - Guillermo Gonzalez Camarena, he created TV in color.

BA: I understand that you were also a lady wrestler in the movies?
LV: Yeah. This is almost 50 years ago. These films were very necessary in our industry. I made five pictures with a fighter. That the name is El Santo, even now they are showing those pictures in Paris. And he created El Cine de Culto, these are really something. You have to pay more to see those films than if you go to regular film. This is the truth.

BA: You made some serious films as well.
LV: Yes, for example I made a beautiful picture [El Rapto de las Sabinas] in Spain and Italy about the foundation of Rome. It was almost 200 men that wanted to found Rome but when they found it, it was so little and they needed women to make a big city so they raped, they took the women.

BA: Now you have to tell me about the costumes. They are not very practical for someone flying around in space.
LV: Well somebody uses their imagination and said I think they will wear these costumes, and they put me in it's like a bathing suit. But okay.

BA: So how do you feel about being here at the festival screening films you made decades ago?
LV: It's very nice that work that you made 40 years ago that people are looking at and have interest. It's wonderful. I like these old pictures better than the pictures from now because now it's sex, and not everybody even say hello and they are nude. They don't have good stories. But it's beautiful for me that they recognize my work.