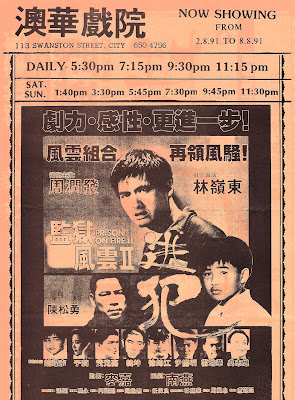 Due to a long-term relationship, I lived in Melbourne (Australia) on and off from 1991-96. I had already discovered the wonders of Hong Kong cinema when I lived in London in the late 80s-90 and so I'd often go to see HK movies at the Chinese cinemas in Melbourne.

Every week the cinemas would put out cheap two colour flyers that you could pick up and needless to say I tried to collect them all. Unfortunately, most of mine are long gone by now but the one I probably remember the most is this one for PRISON ON FIRE 2 which I'm posting here.

The funny thing is that this isn't a scan of my own copy but a scan made by someone else who also went to the same cinemas in Melbourne during the same period. The funny (i.e. funny weird) thing is that we never met! Or maybe we met (we most likely did) but we never met and spoke.

And mind you, we were easy to spot in those days as we would have been some of the very few white guys there. This may be hard to imagine to fans of Asian cinema in 2010 but 20 years ago these films were only beginning to get discovered by fans outside of Asia. And by "fans" I don't mean fans of mainstream or arthouse cinema but hardcore horror and splatter movie fans who'd be reading photocopied fanzines and trying to seek out new movies to deliver the guts and gore. If you're 20 years old you might think I'm trying to pull your leg by saying this but believe it or not but we didn't actually have access to computers or the Internet as we do nowadays. I know; sounds wild. It was a different world back then. LMAO.

The same actually goes for animé; What many people forget these days (or don't know) is that in 1990 these Japanese cartoons weren't discovered by little 13 y.o. nerdy fanboys but (again) by fans who lived on a steady diet of RE-ANIMATOR and TEXAS CHAINSAW MASSACRE PART II type films who wanted new thrills. Well, they (i.e. WE) sure found them.

Many years later, someone left a comment on my other blog in regards to a post about a John Woo film and although he didn't say who he was I recognised him right away as a reviewer named Mark Savage from an Aussie film fanzine called Fatal Visions. I used to buy the mag and remembered him clearly because he used to do a regular section on HK cinema. With each new ish I'd always flick quickly thru the pages and read (devour) that section right away! LOL. Later he also became a film director in his own right but that's not really important in this regard.

But it's weird to think that we could have the same hardcore interest in HK's new wave cinema, and we could go to the same movies for 6 yrs, and yet we wouldn't meet until 13 yrs later when he's in the US and I'm in Scandinavia and it happens on-line! Hah! I remember writing to him saying it was a pity we never met back then and he said "sure is". Life is weird sometimes, just like the films on this blog, LOL.