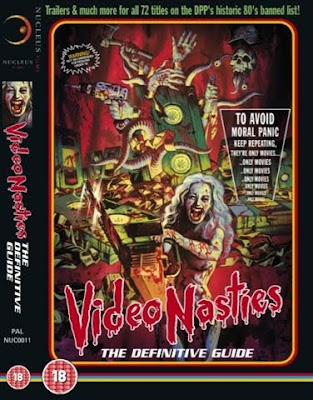 This new documentary on the British video nasty scare of the early 1980s looks just brilliant! It's gonna be out on DVD in October (just in time for piling up nasties for Halloween, aye!). I'm certainly gonna get this.

This is a description I copied from Dvdmaniacs. It's written by "Love, Lock, and Load"'s Jonny Redman:

Due out in October, might not be as interesing to overseas members as it is to us here in the UK but still might be worth a look for the trailers alone...

Prepare to be corrupted and depraved once more as Nucleus Films releases the definitive guide to the Video Nasties phenomenon – one of the most extraordinary and scandalous eras in the history of British film.

For the first time ever on DVD, trailers for all 72 films that fell foul of the Director of Public Prosecutions are featured with specially filmed intros for each title in a lavish three-disc collector’s edition box-set, alongside a brand new documentary – VIDEO NASTIES: MORAL PANIC, CENSORSHIP AND VIDEOTAPE, directed by Jake (‘Doghouse’) West.

Producer Marc Morris, co-author of Art of the Nasty and Shock Horror: Astounding Artwork from the Video Nasty Era comments: “Hopefully, every true movie fan will want this in their collection”..

Disc One presents the 39 titles which were successfully prosecuted in UK courts and deemed liable to deprave and corrupt. These included: Absurd, Cannibal Holocaust, The Driller Killer, I Spit on Your Grave, Nightmares in a Damaged Brain, Snuff & Zombie Flesh-Eaters.

Both discs can be viewed either as a non-stop trailer show, or with newly-filmed introductions from a wide range of acclaimed media academics and notable genre journalists. Each disc is preceded by a brief introduction by cult horror presenter Emily Booth.

Extras include a gallery of original video company idents and extensive gallery of lurid cover art for every video nasty.