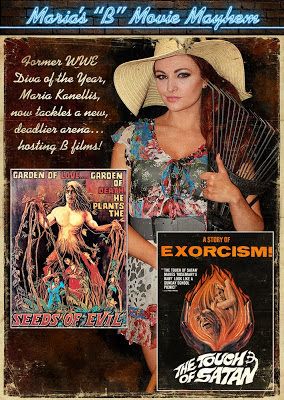 Bill Olsen and CODE RED have just released their latest DVD, a double feature with SEEDS OF EVIL (1972) and TOUCH OF SATAN (1971). Both films are presented in 1.78:1 (16x9). I haven't watched either of them and word is neither is a masterpiece but, hell, they're horror movies from the early 70s and one of them has "Satan" in the title. How could you not want to check them out (yes, I've already placed an order).

My two cents on the covers; Maria Karellis looks nice and all but I wish Bill Olsen would make proper covers instead. How about putting each film poster on each their side, i.e. using the back cover as a front cover as well (and lose the chick entirely). This way each poster would cover a full cover. As it is you can hardly see the details in the pictures. And then use see-thru cases and print the info on the inside of the cover. Much better (as these dvd's are only available via direct sale anyway it's not like there's a risk of losing the potential customer at stores due to their not being able to be grabbed by the spiffy cover text on the back).

Now, Bill, are you going to release LEGACY OF SATAN or not???