Where to go for your best insomnia 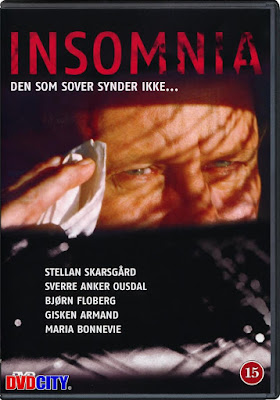 The other day I was finally able to watch the original Norwegian version of INSOMNIA. Last year I scooped up the American remake at a one of my very last attacking the local Blockbuster (the Danish leg of the branch was bough up by another chain called Blue City but, sadly, they've closed my local store now. I never rented anything there but their second-hand dvd bins were pretty cool).

The remake from 2002 was directed by none other than Christoper Nolan and stars Al Pacino, Robin Williams, and Hilary Swank in the lead roles. Both films carry the same title. I gotta tell you, the remake is great! It's one of thee best remakes I've seen in a very long time. But then again, Hollywood does spew out a lot of awful remakes so I guess it's not that hard to create a pretty decent remake.

Anyhoo, as I said I've finally gotten hold of the original Norwegian film from 1997. It's directed by Erik Skjoldbjærg and I have no idea of what he's done before or since. The film stars Stellan Skarsgård, Maria Bonnevie and a bunch of people I've never even heard of.

Both films follow the same plot line; Two cops go to an outskirt cold and snow-ridden place. A killer has off'ed a young girl but that's not all. The cops have problems back home and this leads to one of them, the main character, getting into more shitty quicksand than he can escape from. Or can he? 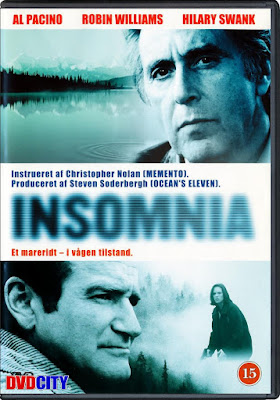 I was surprised to see the remake actually has a more convoluted plot than its predecessor. Also, the remake runs almost half an hour longer than the Norwegian film and lets itself sink way more into its insane insomniac nightmare.

I liked both films and both Al Pacino and Stellan Skarsgård are excellent in their leads ... but it's Al Pacino and the remake than keeps sitting at the back of my mind even now many months after having sat thru it. I need to rewatch both versions, though, and altho I liked the remake better I highly recommend than you watch both versions and make up your own mind. I checked the user comments under the Norwegian version's trailer on YouTube and it seems more people like the original film better.

I watched the 1997 film on dvd from the UK and the remake on a local release. Both films are on dvd in the UK and Scandinavia.

Trailer for the Norwegian film and (at bottom) the American remake: