The ONLY real Bruce Le

There's great and serious kung fu movies like the old ones from the Shaw Brothers studios. And then there's the trashy fun ones like the ones that star one (or several) of the Bruce Lee clones! And if you're a regular reader you know what I think of those trashy flicks. Yeah, love 'em. You gotta! The best (or whatever) clone was probably Bruce Le. I'm by no means an expert on Bruceploitation but a couple of my favourites are BRUCE LEE IN NEW GUINEY and BRUCE AND THE SHAOLIN BRONZEMEN which I posted about a little while ago. Tonight I won THIS one: 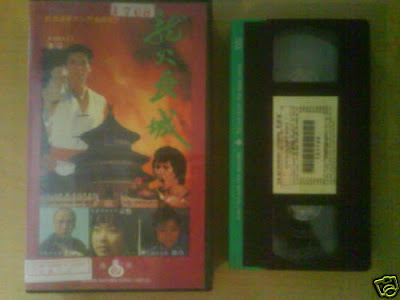 Yay!!!
It's FIRE ON THE GREAT WALL about which our friend Wiki says:

Among fans of Bruceploitation movies, Ninja Over the Great Wall is often praised for its high production values and relatively fast pace - two things absent from nearly every other Bruce Le film. On the website Bruceploitation, "Keith" writes:

"While liberally borrowing from the Bruce Lee classic Fist of Fury, this Bruce Le vehicle is still quite entertaining. The fight scenes are lots of fun with Bruce taking on hordes of ninjas literally everywhere. Viewers should get a kick out of a scene where Bruce fights a ninja who is on fire. Talk about having control of your mind and body. Also, there is the requisite "You killed my teacher" Japanese dojo attack required by Bruceploitation Law. The end fight scene (shot on location at the Great Wall) is mighty impressive and brutal. What surprised me the most about this film is the pessimistic storyline. Pretty much everyone dies. Using the Japanese occupation of China as a backdrop, the filmmakers also inject a bit of political commentary (not saying the Fist of Fury was subtle though). If only Bruce Le had made more movies like this"

The tape I'm getting is a PAL tape from HK in Cantonese with English subs. Apparently, the only DVD version available (or not available as it's OOP) is a fullscreen English dubbed bootleg from those Ground Zero crooks. :D
Posted by Jack J at 8:51 PM